Direct Pipe was developed to provide another tool in the toolbox of trenchless pipeline installation industry. It was not intended to replace horizontal directional drilling (HDD), but as an alternative installation method for projects with specific site conditions where HDD is either not possible, risky, or impractical. Direct Pipe is not a panacea or a solution for every site or site condition; however, it could be the right solution for many projects.

The Direct Pipe is sometimes described as a combination of HDD and microtunneling, although it has little in common with HDD, with the exception of a similar curved profile. Direct Pipe is typically a near-surface or surface launched, single-pass, curved microtunnel installed using a modified microtunnel boring machine (MTBM).

The steel installation pipe (casing pipe or product pipe) is advanced through the designed profile using a hydraulic pipe thruster assembly. The MTBM is equipped with articulated joints connected to internal hydraulic rams to provide the steering capability as the installation pipe is thrust forward. This allows the pipe to be installed in both vertical and horizontal curves, similar to what is possible with HDD. Like microtunneling, the hole is continuously supported during installation.

History and Innovations of Direct Pipe

Herrenknecht continues to make innovations and refinements to the process. With the incorporation of the proprietary jet pump from Herrenknecht’s E-Power Pipe technology, the smallest Direct Pipe MTBM diameter was reduced to 28 in. Two successful 28-in. diameter installations were completed in Poland in 2021. Herrenknecht have also modified the MTBM seals on some of the machines to allow for installations deeper than about 100 ft (3 bar). 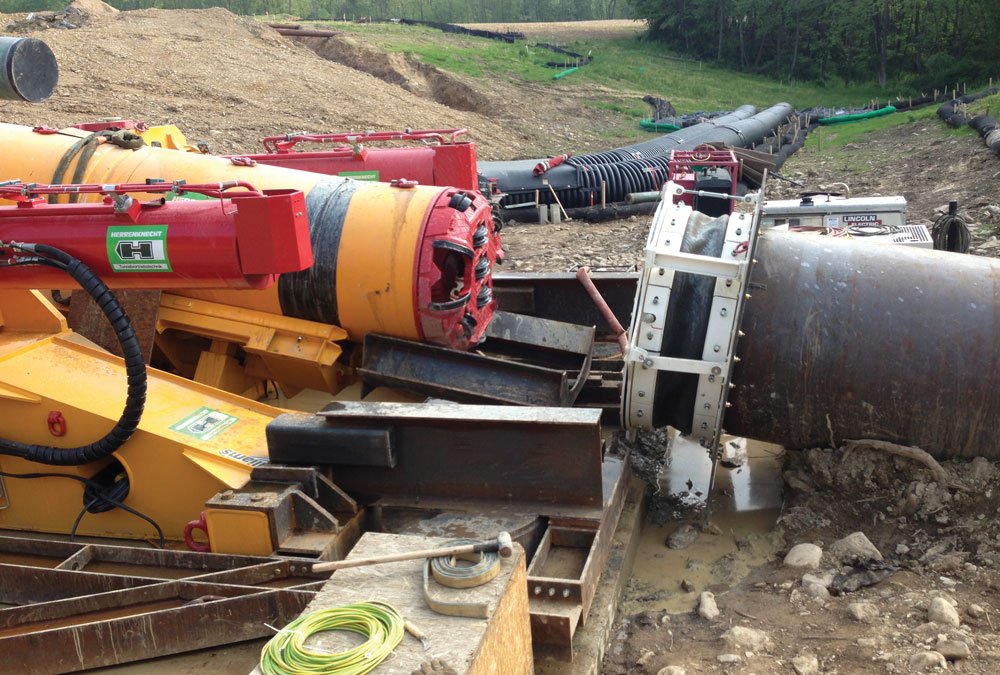 Even though the first several Direct Pipe installations in North America were in the United States, over the last several years, more installations have been completed in Canada. Reasons for the increase in use in Canada are varied but include difficult subsurface conditions for HDD and endorsement by a few owner companies who believed Direct Pipe risks were less than HDD.

The reasons for the relative decrease in use in the United States are equally varied, but include perceived added cost, higher owner tolerance for HDD risks, diameter limitations, and more favorable subsurface conditions for HDD, particularly in the southern half of the country.

Direct Pipe has several significant limitations, perceived or real, that have typically limited its use worldwide, but particularly in the United States. Primary of these is the unit cost of installation. Direct Pipe can be more expensive than HDD on a unit length basis for subsurface conditions favorable for HDD. In difficult subsurface conditions where HDD is not well suited, the cost of a Direct Pipe installation may be less than costs associated with HDD attempts, which may even be unsuccessful. 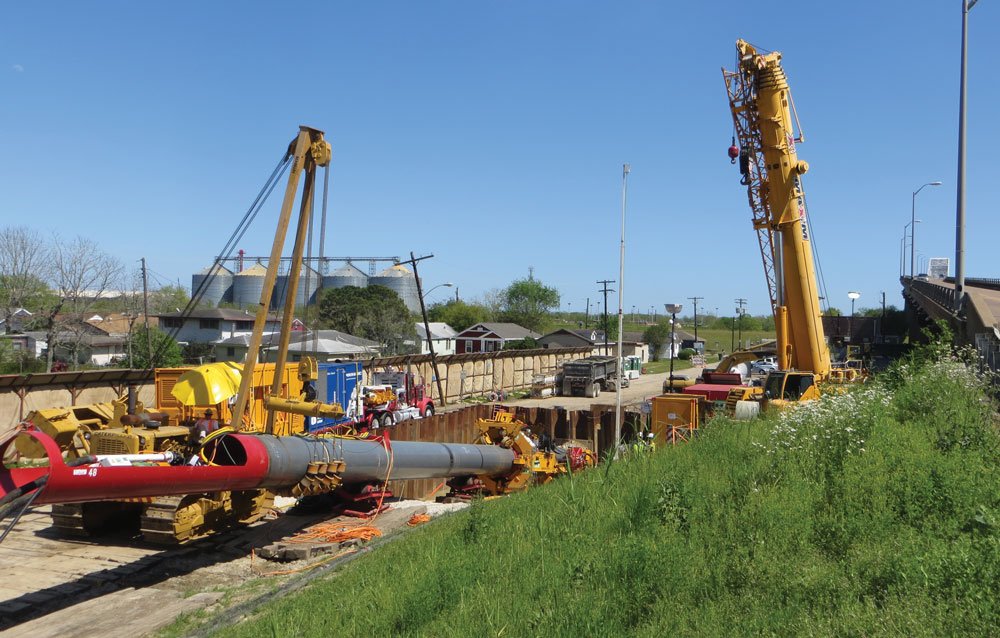 For pipeline installations under levees, which are under the jurisdiction of the United States Army Corps of Engineers (USACE) or other levee owners, Direct Pipe can provide advantages over HDD. These permitting agencies require an engineering evaluation of the risk of hydraulic fracture and the potential for damage to the levee foundation’s soils. Under the new guidelines for pipeline crossings under levees, the USACE requirements are such that a pipeline installed by HDD must penetrate a competent cohesionless soil in order to be protective of the levee foundation soils (USACE 2020). If a competent soil layer is not present, Direct Pipe could be the only viable solution because, in Direct Pipe, the fluid pressures experienced by the soil are only slightly higher than hydrostatic. This reduction in fluid pressure and associated hydraulic fracture risk makes Direct Pipe an ideal solution for crossings of levees.

Direct Pipe is less sensitive to gravel and cobbles as they can be ingested and crushed before being transported through the slurry return line. Direct Pipe is also able to ingest boulders up to about one-third of the face diameter.

Other advantages of Direct Pipe include continually supported hole, flexible workspace and stringing area, and shallow depth of cover requirements. Because the tunnel is always supported by the MTBM or thrust pipe, hole instabilities are not typically an issue. While the workspace should be as long as practical to reduce installation durations, the stringing area can be as short as 40 ft. The design depth of a Direct Pipe installation can be shallower, and the associated length can be shorter when compared to HDD because the risk of hydraulic fracture is less. 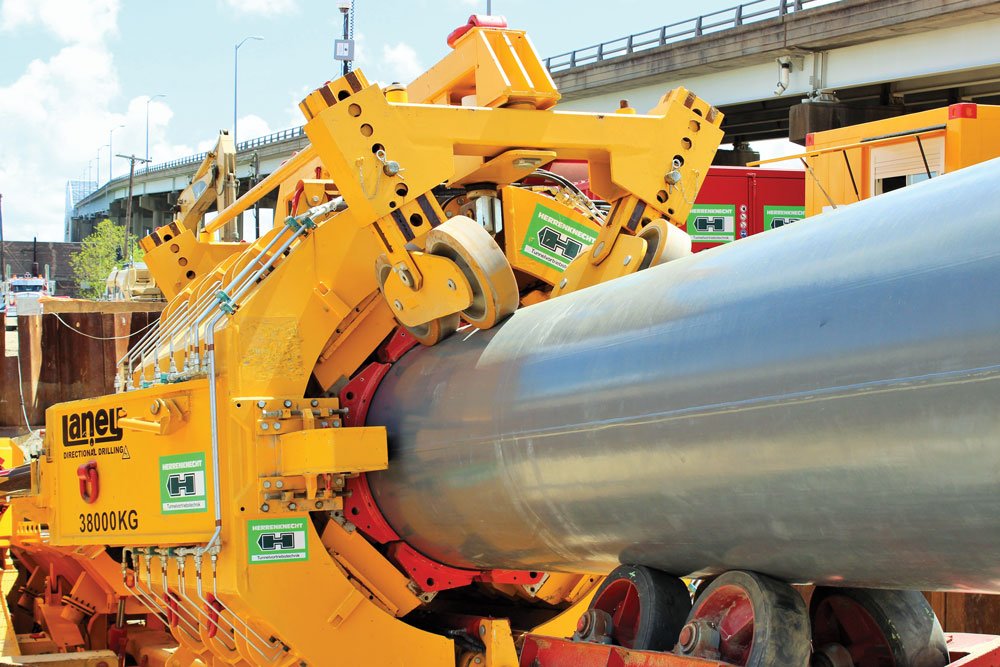 Direct Pipe will never be a replacement for HDD for trenchless pipeline installations; however, it can be an appropriate solution where HDD is not possible or high risk. The use of Direct Pipe should be evaluated by a qualified trenchless engineer and selected after a thorough cost/benefit evaluation has been completed.